Hi, Since I’m all about motion and play I thought I’d share some imaginative activities for kids to do on cold or rainy days. When I was little my 3 brothers and I spent many cold/rainy days putting on our own plays and they are fond memories for me. This first series is a selection of low cost theatrical plays that kids can do with very few props and/or costumes that I found on PBSKids.org. I hope your kids enjoy them! Cara Zara 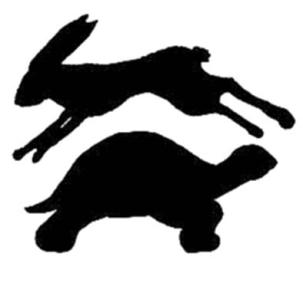 The Tortoise and the Hare: Shadow Puppet Play

How to make the shadow puppets: PBSKids.org

Tortoise: Welcome to “The Tortoise and The Hare, A Shadow Puppet Play.” Listen and watch closely.

Hare: Hey Tortoise!! I challenge you to a race at high noon today!

Tortoise: Sure, that would be fun!

Hare: Are you sure? You know you’ll never beat me!

Hare: Have it your way. See you at high noon!

(The Hare zips off, the Crowd cheers, and the Tortoise slowly trails behind.)

(Hare speeds past the tree as the Tortoise slowly walks past it.)

Hare: I’m so far ahead of that slow turtle that I think I’ll just take a nap by this nice tree.

(As the Hare drifts off into a snoring sleep the Tortoise slowly walks past the Hare.)

Narrator: Before you knew it the Tortoise arrived at the finish linewhile the Hare continued his napping.

The Crowd cheered as the Tortoise reached the finish line.

They all congratulated him…

Narrator continued:
and then left to prepare a party in his honor!

Tortoise: See you later at the party!!!!

Hare: Hey, where is everybody?

Tortoise: Everyone is gone. The race is over. I won!!!

Hare: You won? How could you have won? I’m supposed to win!

Tortoise:
Don’t you know that slow and steady wins the race?

Narrator: And so our hero, the Tortoise, walked away a winner to his celebration party because everyone knows that…

All: …slow and steady always wins the race!